Child choristers have been singing at Salisbury for 900 years.  This film – an observational portrait, history and musical immersion in one of Britain’s most distinctive and beloved cultural traditions -  follows Salisbury’s choristers over Easter and through the summer term of 2011.

Salisbury Cathedral’s separate boy and girl choirs each contain 16 of the most musically gifted 8-13 year-olds in the country. Their role, now as always, is to sing day-in day-out some of the most sublime music ever written in one of Britain’s most beautiful buildings. Indeed there are many who believe the chorister’s pure, clear, treble voice is the finest instrument in all music.

‘Angelic Voices’ spends four months with the choristers as they go about their day-to-day lives, discovering their own history and singing some of the most loved music from a sacred canon spanning six centuries from mediaeval plainsong to today. Under the direction of indefatigable choir master David Halls they rehearse and perform works by Sheppard, Byrd, Purcell, Handel, Mozart, Stanford, Parry, Alcock and Rutter.

Lining up in his black cloak, Alex, 10, says he feels like Harry Potter while Freddie, 12, admits “other children think we are weird and actually we are not”. Yet few children perhaps have the poise or conviction of Susanna, 10, who explains “singing for choristers is part of them.  If you said to me ‘you’re not allowed to sing anymore’, it would be just like me telling you that you can’t see your child anymore.” It is doubtful Salisbury’s early choristers, often so hungry they were forced to beg for bread, thought so fondly of their work. But when plainsong turned to polyphony the choristers’ plight was transformed – with the top cathedrals in the late middle ages known to pay Premiership-style transfer fees for the most musically gifted boys, some of whom were even kidnapped by rival cathedrals. Today’s top trebles at Salisbury are seen competing for one of the most famed solos in a chorister’s repertoire. Will Finnbar, Freddie or Noah be picked for Stanford’s Mag in G?

The girls’ choir was founded in 1991 – Salisbury being the first Church of England cathedral to grant girl choristers full equality. Yet even today the Dean, June Osborne, says she gets “offensive letters from people who say we have sold the pass with the English choral tradition.” As the summer term nears its end there are big decisions for David Halls to make. Who will succeed Anita as Dean’s Chorister and Alex as Bishop’s Chorister?  From the recreation of a plainsong mass by John Sheppard, to ‘Ave Verum Corpus’ by William Byrd, and the Anthem ‘Hear My Prayer’ by Henry Purcell, the choirs tackle some of the greatest composers of church music.  But eventually Anita, Alex and the other Year 8s sing as choristers for the very last time and there’s not a dry eye in the house. David Halls is convinced that ‘if you turned up in Salisbury in 900 years time you will find girls and boys and men singing. Of course they should be singing music which is contemporary to them, but you can’t ignore the past, it’s what gives us the foundation for all we do.’ 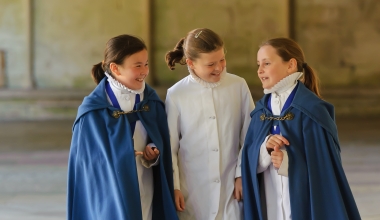