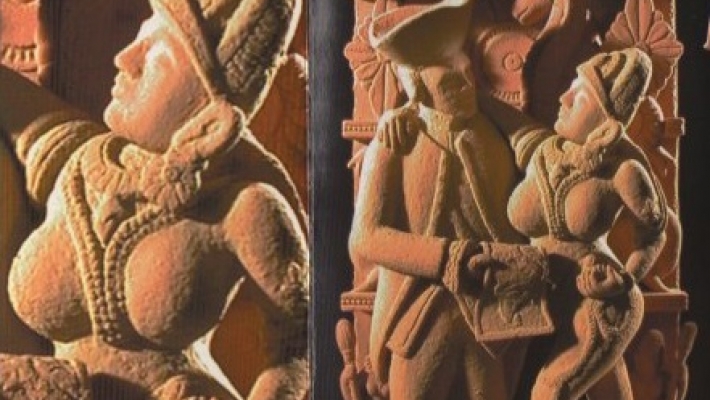 An Indian Affair reveals the hidden story of Britain’s relationship with India. Historian Maria Misra presents the remarkable tale of an affair that began with lust and matured into mutual respect, even love, until a new British desire to dominate locked the partners into an unequal and abusive marriage – the Raj.

The relationship between Britain and India was born of greed and self-promotion.  India was rich beyond measure and young men from Britain went to make fortunes.  The film forcusses on Robert Clive, later Lord Clive of India, who personifies the Wide Boys in the Wild East who live fast and died young, loving the parties, the free and easy excuality and the plentiful slcohol.  They and their Indian agents and bankers all grew rich together in this multicultural yuppie wonderland.  Then, selling themselves as mercenaries in an Indian power dispute, the British under Clive found themselves  accidentally in charge of India’s richest province, which they looted with breathtaking efficiency.  When they came back to Britain, these so-called “Nabobs” outraged polite society by flashing their cash and buying influence.

In the second episode of this series looking at Britain’s relationship with India, we see how Britain responded to India’s sleaze and excess.  Warren Hastings was the man they sent out  to clean up India.  He had a vision of co-existence rather than rule.  An astonishing golden age of cultural harmony was born, with the British falling in love with Indian civilisation.  Huge numbers went native, changing their religion and becoming White Moguls.  They adorned their bodies and homes with Indian fabrics and patterns and opened their minds to Indian science, philosophy and literature.  And Asian travellers and settlers began to come to Britain, bringing cotton sheets and underwear, a fashion for personal hygiene, and of course, curry.

Episode 3: THE ROAD TO THE RAJ

After the loss of the American colonies, and the French Revolutin, the forces of British conservatism gathered strength.  To them Britain’s love afair with India was wrong: Britain’s responsibility was to bring India out of barbarism and immorality.  A combination of imperial bullies and high-minded idealists created an English speaking Empire, rooted in racial separation and religious prejudice.  How and why the Indians let them for 50 years before a failed rebellion gave rise to the British Raj, and how India coul.d have been very different, is the fascinating core of this programme.

The Raj, argues Maria Misra, wasn’t inevitable.  It was a century long blind alley from which we are finally emerging, as Britain rediscovers the tolerance and multi-culturalism that it had before – in the 18th Century.

An Indian Affair, a book to accompany the series, was written by Archie Baron

This programme was made by Takeaway Media, Wingspan's parent company which Archie ran with Neil Cameron