When not working directly on a production, Helena looks after Wingspan’s development slate.

She has worked with Archie on and off since 1997 – it seems he has forgiven her for running him over on a snowmobile when making Joanna Lumley in the Land of the Northern Lights...
As development producer, Helena has been involved at the start of numerous Wingspan productions over the years.
As producer /director, her credits for Wingspan include Tunes for Tyrants (eps 1&2), How to be Bohemian (ep 1), Ian Hislop's Age of the Do-Gooders (ep 2),  Getting Our Way (all 3 episodes), and the award-winning Ian Hislop: When Bankers Were Good. Most recently she produced Dancing on Thin Ice with Torvill & Dean for ITV.
As executive producer she also helps to support other projects alongside Archie, whether that's history – Workers or Shirkers: Ian Hislop's Victorian Benefits, arts – Abducted: Elizabeth I's Child Actors, or science – Diagnosis on Demand?
When she’s not at Wingspan, she has another life as a primary school teacher.
Archie Baron 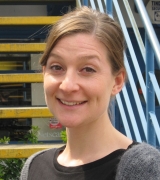